Congratulations to this group of ten ultra-fit cyclists who have completed the ‘Way of the Roses’ – a gruelling 170-mile coast-to-coast route from one side of the country to the other.

Hudson Contract General Manager John-Lee Thompson was one of the organisers of the cycle marathon, which started in Morecombe Bay, and progressed through the Lune Valley, Forest of Bowland, Yorkshire Dales National Park, Nidderdale, Vale of York and Yorkshire Wolds to Bridlington Bay.

John-Lee says:  “I was keen to be involved as I spend most of my weekends coaching the Under 9’s football team at Flamborough and I support Real Aid, which are the two charities that have benefited from our endeavours.  I’m also a keen cyclist – or at least I was, until after this trip!”

Real Aid provides a variety of different services, with an emphasis on practical help, as the name suggests.  Their projects include supporting families who suffered as a result of flooding in East Yorkshire, running food banks in Bridlington and helping to find safe homes for victims of domestic violence.

Flamborough Junior Football Club operates five teams and – in the wake of the Lionesses’ triumph at the Women’s World Cup – will soon include a sixth girl’s team.  The organisation aims to teach youngsters of all abilities the values of sport, teamwork and inclusion and is run solely by fundraising initiatives and volunteers.

The ‘Top Ten’ cyclists, decked out in Hudson Contract cycling jerseys, were supported by Real Aid’s

Lyndsey Killick as a support driver.  The line-up includes football coaches and football dads plus a few friends who were persuaded to join in with the promise of a sense of achievement, and helping the two charities.

John-Lee adds:  “What started out as a theoretical idea turned into months of training days in the saddle.  Then the real thing arrived – and the first day’s fifty-two miles provided many hill challenges, a downpour, and a welcome pint or two afterwards.

“On day two with the mercury rising to 28 degrees, our journey began at Burnsall in the beautiful Yorkshire Dales with more hill climbs, passing some fabulous scenery and places to visit, before finishing in York.  The final leg to Bridlington, whilst flat, provided the greatest drama with technical problems, punctures, tyre replacements. . . and being overtaken by two people in their seventies on fold-up bikes!

"A warm welcome in Bridlington from friends and family rounded off our adventure."

“Our target was to raise £1,000 – and to date, it looks likely we’ve raised double that amount.  It’s even more worthwhile to know we’ve been able to help these two charities to that extent.” 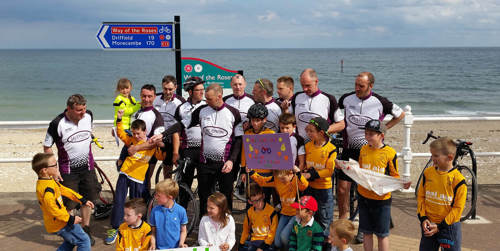