It started in a small way, back in 2011.  That was when we agreed to give financial support to a couple of local construction companies, enabling them to take on apprentices.  Since then, the Hudson Contract Apprenticeship Scheme just keeps growing . . . our 80th apprentice recently started out.

We are currently helping to support 20 apprentices.  Here are some of our latest ‘recruits’ and their employers.

Ryan Gray attends East Riding College in Bridlington on a Site Joinery Apprenticeship.  He knows his new boss pretty well . . . having followed his father Keith into the family business. 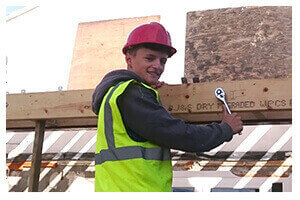 Keith has been in the industry for over thirty years, starting out as an apprentice in Driffield, East Yorkshire.  He said:  “When Ryan showed an interest in joining me, I thought it was time to find out how to take on my first apprentice. That was when I discovered we were eligible for help from Hudson Contract.  It’s great to know Ryan wants to follow in my footsteps and that the family business will continue.  Joinery is an excellent trade to get into, and having an extra pair of hands around is a great help, too.”

Ryan says:  “I love being an apprentice and learning from my dad.  I particularly enjoy the variety of work I get to undertake.  So far I’ve built kitchens, roofs and installed new floors.”  When he’s not learning his trade, Ryan is often found on the golf course . . . he plays off scratch, and at one stage considered turning professional.

Still in Bridlington, Ideal Building Systems have taken on two site carpentry and joinery apprentices, through East Riding College.  “We have created a rolling two-year programme of taking on apprentices,” says Works Manager Mark Snowden.  “Once they have completed their courses our apprentices may choose to move elsewhere, but if we can provide them with a good work environment and support them through their training we hope many will stay and help the future of our business.”

Twenty-six-year-old Matthew Foley and Sam Johnson, 19, are in the first wave of new recruits. 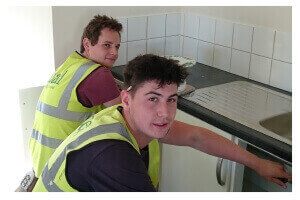 Matthew says:  “We get to work on a variety of projects, and different trades. On one recent job, we had to make changes due to the piping, so we had to look at the plans and adapt the stud work.   That’s real life, not something you learn in a classroom.”

Sam adds:  “I wasn’t planning to do an apprenticeship.  But with no work experience I knew it would be difficult to get a job, so I had a rethink.   Now I’m getting the best of both worlds, because I get to learn while also getting a great introduction into the world of work.”

Hudson Contract Managing Director Ian Anfield says:  “With huge amounts of press coverage on the skill shortages in construction, it is more important than ever that young people engage with our industry, and likewise, that firms are given the support to take them on.  This is where Hudson Contract looks to help.  What started out as a good idea has grown into a project that is making a real difference to the lives of young people and the construction firms that employ them.”

Find out more about our apprentice scheme here