The UK inflation rate has tumbled to a 14-year low of 0.5%, and the Bank of England thinks it could still fall further.  But what’s been happening to subbie earnings during the past twelve months?

The graph below shows the peaks and troughs throughout the year. 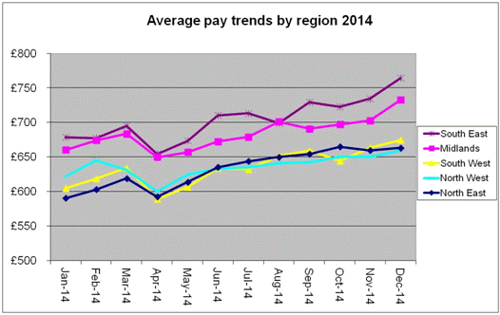 “There’s a clear upward trend,” observes Hudson Contract Managing Director Ian Anfield.  “And no real surprises in the figures.  As you’d expect, there’s a clear differential, with earnings in the South-East and the Midlands higher than in the rest of the country.  All regions ended the year strongly. The lower-earning regions saw an increase of at least £50 a week over the course of the year, while weekly earnings for those in the South-East saw an average increase of double that, thanks to rates taking off between September and December.”

In terms of individual trades those whose annual earnings soared highest were:

Over half the trades we report on showed increases of over 10% in the last 12 months and only three saw earnings rise by less than 5%: Mechanical & Engineering, Steel & Timber Frame Erectors and Insulation.