Last month, we introduced you to one of the youngest apprentices – a sixteen-year-old – sponsored by Hudson Contract.  Now, meet Steven Cammish who is proving that at the age of 31, it’s definitely not too late to learn a new trade.

“They call me Pops at college,” Steven laughs.  “But I don’t mind at all.  I enjoy helping some of the younger students.  If someone is thinking about learning a trade, no matter what their age I would say go for it.  Yes, you might need to reign in the spending whilst learning, but the long-term prospects are great.”

Steven has two years left on his electro-technical apprenticeship, having signed up after the firm he was plastering for went bust.  “Going back to college has made me realise how much I like learning and increasing my knowledge,” he says.  “I’m aiming to become an electrical architect.” 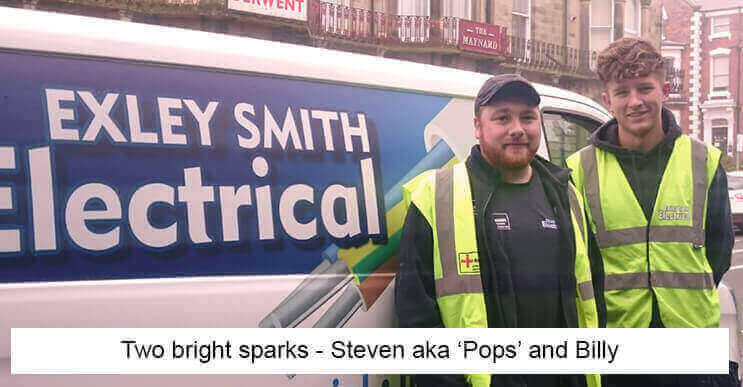 Steven and fellow electrical apprentice Billy Gracie both work for Scarborough-based Exley Smith Electrical. They are currently onsite redeveloping a former hotel into luxury apartments, and have been helping out with first fix and second fix electrics.

Billy started his course in January, after labouring for his uncle. He was about to join the army to learn a trade when he was spotted by Exley Smith and invited to work for them instead.

“College is good as we are get to learn things we are not doing on this particular site, but it’s the practical element I really enjoy,” he says.  “I still have three years to go, but I’m already ambitious.  I want my own van and to be in a position to pass on my knowledge to other apprentices in the future.”

Boss Jamie Exley adds:  “We’ve had a culture of training apprentices for a number of years now and the Hudson Contract support enables us to do more, by enabling us to take on several youngsters at a time.”