Back in the early 2000's, during the heyday of lad mags such as Loaded, when the internet was still in its infancy, Hudson directors David Jackson and David Bradley launched a 'tongue in cheek' online publication called AYE’UP.COM

They covered the important topics of beer, pies and politics taking the mickey out of themselves and anyone they encountered in the process.  Maybe they were ahead of their time, or maybe talking about pies can only take you so far - sadly AYE’UP came to an end soon after it started.

However, one thing AYE’UP can be proud of, love him or hate him, 16 years ago AYE’UP predicted Boris Johnson would be a future PM, a fact we are sure he would be thrilled to learn.

Click on the image below to find out more 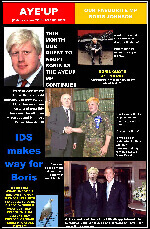