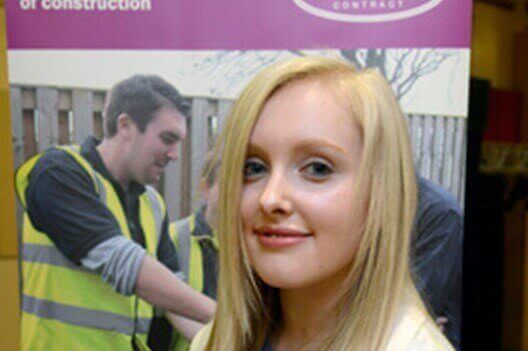 “Yes, I’ve left the construction industry.  But I don’t regret joining it!”

To celebrate both National Apprentice Week and International Women’s Day, Hudson Contract’s Stuart Sanderson caught up with Danielle Sharpe, winner of our own Apprentice of the Year award in 2017, and discovered she has some thought-provoking advice for schools and construction firm owners.

Fast forward to 2019, and Danielle now works in payroll administration for an accountancy firm in Scarborough. Despite leaving construction, she has no regrets about her original apprenticeship decision – here’s why:

Why did you leave construction?

I gave up plumbing last year – not because I didn’t enjoy it, but because I’m the type of person who wants to try new things and experiment at this stage in my career.  I saw an opportunity in payroll so I thought why not!  Having said that, I certainly haven’t ruled out going back into plumbing at a later date.

Why did you do the plumbing apprenticeship?

I had always fancied doing something in construction, but I was really nervous about what an employer in the industry would be like. I’m lucky because my stepdad is a self-employed plumber, so with financial support from Hudson Contract I did my apprenticeship working with him and my local college.

What’s the most important thing you’ve learned from plumbing?

Knowing how to communicate with and work for different kinds of people. No two customers are the same. Come to that, neither were the bathrooms they wanted!

Did you gain any transferrable skills?

Without a doubt. In my new job, I’m office based, so even though I don’t meet clients face-to-face any more, I’ve picked up the skills I need to have productive conversations on the phone. And thanks to my years in plumbing, I’m far more confident now than I ever was before.

What did you dislike most about plumbing?

I didn’t particularly enjoy trekking backwards and forwards to the van... Especially when it was parked down the road and I had heavy stuff to carry. But it helped me keep fit.

What do you think should be done to get more women into construction?

Employers could do more to show they actually want to recruit women.  If it weren’t for my stepdad, I’d have found it very intimidating applying for jobs because I felt the perception was that I’d be useless, simply because I’m a woman.  Of course employers don’t publicly say it, but I feel most of them are automatically looking to take on a lad.

I also think schools need to improve careers advice.  My school mainly pushed people into university or college to do courses like business admin, and when careers did mention construction it was only to the lads in my year – never to me or the other girls.

What would you say to a young woman considering plumbing now?

Put your worries aside and go for it! The construction industry may seem intimidating, but the clients you work for are not. Customers told me how refreshing it was when I arrived to do the job. Having been a plumber myself, I’d say definitely give it a go!